I'm pretty sure this is a Brown Pelican but could be wrong. He/she was mooching off the tourists in Victoria's Inner Harbour the last time I went downtown, which was back in December. I dropped a sun shield while shooting pics of the critter and it rushed right over to me, assuming, I suppose, that what I had dropped was edible.

Piper and I survived the holiday season unscathed, mainly because we successfully ignored the whole frenetic mess. I'm always amazed at how folks get their panties all twisted because of an arbitrary date on the calender. Insanity, it is said, is doing the same thing over and over while expecting a different result.

I became officially old on January 4th when I turned 65. Now I can legitimately call myself an eccentric old fart, which certainly reads better than crazy old man. :-) Still have a 30-inch waist and weigh exactly what I weighed at age 20. Must be doing something right.
Posted by Piper's Pal at 08:46 8 comments: 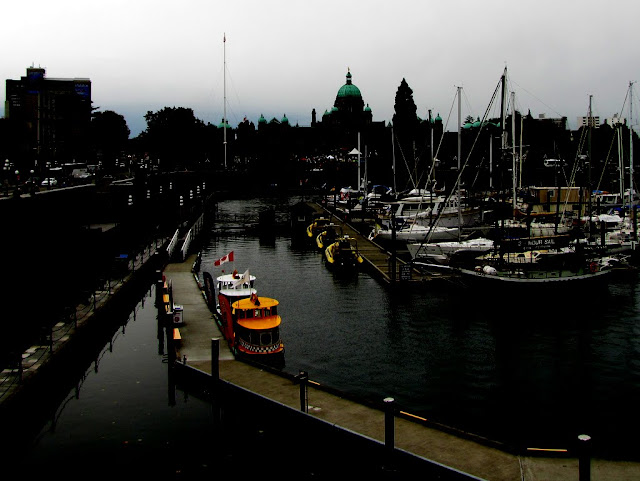 The wee boats highlighted in the foreground are water taxis that provide one of the best value tourist options in this city. Riding in one is fun! There are various tours available as well as the regular routes around the Inner Harbour. I used to take one all the time when I lived on one side and worked on the other.
Posted by Piper's Pal at 08:20 5 comments:


Ever wonder why smart people(including us) do amazingly stupid things?  Or why, despite knowing better, we scarf down myriad pieces of cake, seeming unable to stop ourselves?  Perhaps The Self is not all powerful and in control of our thoughts and actions.  Science is beginning to offer explanations.  Here's a sample.


North America does love a good sex scandal, almost as much as the British do, and the Petraeus, um, affair has been an especially juicy one. It’s been so complicated, in that reality-show kind of way, that we need charts depicting who’s connected to whom.

As always happens when a powerful married man is revealed to have been hiking the Appalachian Trail, finding Freudian uses for cigars, or supporting his maid’s child, there’s been a lot of speculation about the psychology of honcho guys. What is it about the powerful?

This noodling is off-base on several counts. First, it neglects the fact that roughly one-quarter of married people — approximately equal numbers of men and women — report having had an extramarital affair. They aren’t all powerful. It’s true that the successful may indeed be more likely to commit adultery, but not for the reasons usually cited, such as their supposed sense of entitlement.

It also conflates social monogamy with sexual monogamy, assuming that these complicated sets of behaviours are one and the same. But Petraeus’ experience shows this is not necessarily true. By all accounts, Petraeus highly values his relationship with his wife. Yet he was not sexually monogamous, and because he wasn’t, he placed his social relationship with his wife, not to mention his job and reputation, at risk.

The difference between social and sexual monogamy is partly chemical, as was illustrated recently in a fascinating experiment. You may have missed it, but the Journal of Neuroscience released a study earlier this month about the effects of the neurochemical oxytocin on the behaviour of monogamous males.

Oxytocin has gotten a lot of publicity over the past few years, not all of it entirely accurate. It’s been called the “cuddle” hormone, a “love drug,” even “the moral molecule.” But it turns out that the effects of oxytocin depend on social context.

In the study, the scientists squirted oxytocin (or an inert spray) up the noses of male test subjects, some of whom were involved in a monogamous relationship with a woman and some of whom were not. Then they introduced the men to an attractive woman.

Rather than approach the attractive woman, as one might anticipate given oxytocin’s reputation, the men in monogamous relationships who received oxytocin tended to keep her at a distance compared to men who received placebo squirts. Oxytocin had no effect on single guys.

In other words, giving a shot of oxytocin up the nose of bonded men tended to reinforce monogamy. This finding supports work by a Dutch scientist named Carsten de Dreu who has shown that oxytocin tends to increase trust toward members of a group, but not toward outsiders. In this case, the pretty woman is the outsider.

This is an interesting finding, but not so much because it tells us that oxytocin will forever prevent a man from stepping out. Rather, it shows us that chemicals in our heads can influence our social behaviour just as they influence the behaviour of animals, to the point that we do not have complete rational control over our actions.

A large body of evidence gathered over the past 15 years or so shows how chemical communication between neurons can bias our behaviour. Oxytocin is only one of the chemicals involved. Stress hormones, dopamine, vasopressin, opioids (the brain’s heroin) all have their say. And the science tells us that “monogamous” individuals — whether birds, rodents, or people — can be driven to have sex with those outside their socially exclusive pair bond.

One of us, Larry Young, conducts studies of bonding in a monogamous rodent called a prairie vole. His work has often been cited by social conservatives who have used the prairie vole as a kind of furry paragon of morality because the critters are stubbornly loyal to their mates. Socially, that is. Sexually, it’s another story. Many bonded males are happy to have sex with another female if they happen to run across one that’s in heat and willing. But they come home to their partner at the end of the day.

The neurochemical dopamine is motivational. It drives us to act to appease a desire, such as for food or sex, and when we do, we get a reward, typically a burst of endogenous opioids. With experience, we learn just how pleasurable it can be to tickle this reward system.

So our brains are organized according to chemically controlled circuits, each whispering to us about what it wants. When we see an attractive man or woman, reward circuits tell us how incredibly hot sex with that person would be. But oxytocin- and vasopressin-related circuits are telling us we love our partner, and CRF is helping us picture how miserable we’d be without our mate. The rational part of our brain, primarily the prefrontal cortex, is weighing these possible costs of cheating, and reminding us that the sexy person is married to our boss.

Which system shouts the loudest may depend partly on our genes. But one person’s genome is not exactly like another’s. We have variation. As we explain in our book, The Chemistry Between Us: Love, Sex, and the Science of Attraction, this variation can make a lot of difference. When a European team studied monogamous birds called great tits, they found that 13 per cent of chicks resulted from extra-pair mating. The birds, both male and female, most likely to fly off to find a paramour tended have “bold” personalities. This gregarious, novelty-seeking personality has been linked to a variation in a gene that holds the recipe for a dopamine receptor called D4, or DRD4 in humans.

A version of that gene known as 7R+ has been implicated in drug addiction, impulsive behaviour, risk taking and gambling. But it’s also been found to be prevalent in people who are migrants, innovators, the ambitious — people who have key traits for success. (There has been no study so far of its prevalence in four-star generals or political leaders.) In one sample of 181 young adults, those who had at least one copy of 7R+ had 50 per cent more instances of sexual infidelity than noncarriers.

In other words, sexual and social monogamy are driven by different brain circuits. The recent oxytocin study showed that exposing a man’s brain to a surge of the chemical immediately before he meets an attractive woman can drive him to keep his distance, but short of carrying a bottle of oxytocin spray in a purse for use just before every cocktail party, what else can we take away from the new study?

For one, have more sex. As the study’s authors wrote, “the most obvious physiological stimulus for promoting endogenous (oxytocin) release in men would be having sex with their mate.”

Larry Young believes that kissing, hugging, caressing and intimate small talk can all help to keep a man’s oxytocin high, too.

But there’s a problem with this take-away message. The longer we’re with our social partner, the less intimacy and sex we have. When new mates are first introduced, they have sex like crazy. After a time — in marmosets, for example, it’s about 80 days — they won’t be having much sex at all.

We’re not automatons. We are responsible for our actions. But our baked-in biases can make us susceptible to infidelity. Our brains can be a battlefield of competing interests and sometimes desire wins. It may win more often in people like Petraeus, whose bold, creative thinking we so admire can come with a bias toward behaviour we don’t. This doesn’t make him special, it makes him human.

Slate; Brian Alexander is a journalist and author whose books include Rapture: How Biotech Became the New Religion and America Unzipped: The Search for Sex and Satisfaction. He and Larry Young are co-authors of The Chemistry Between Us: Love, Sex, and the Science of Attraction.
Popular

BACK GARDEN ON 1 DECEMBER 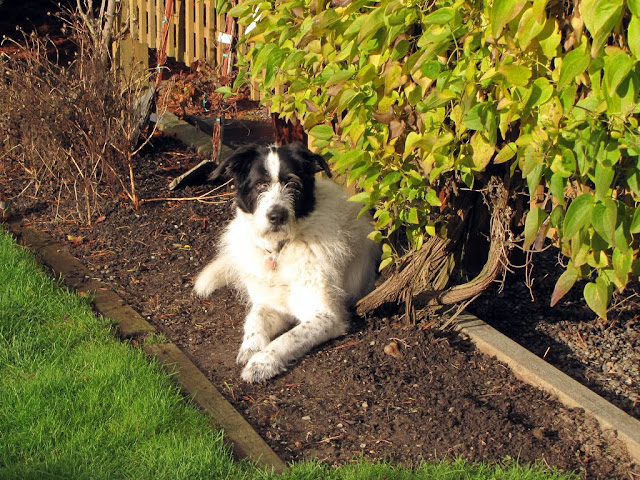 I shot this pic of Piper in the garden this morning, about 15 minutes ago, actually. She's soaking up the rays that appeared through the cloud cover. A few feet away from her I was getting rained on. A typical Victoria December day. 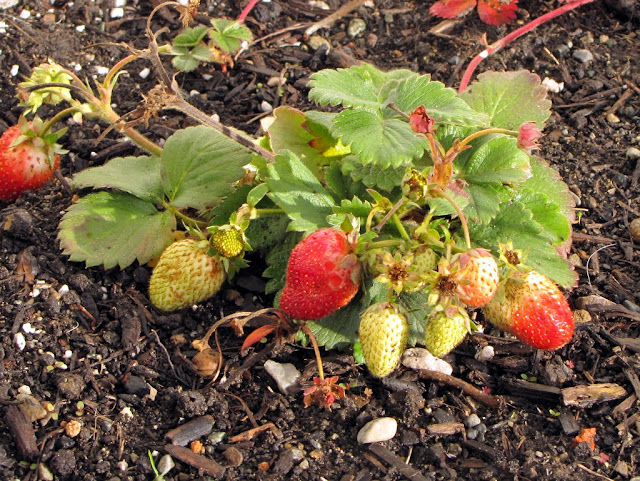 This is not usual for the first of December. These are an Everbearing variety  but I've never see them making berries this late in the year.
Posted by Piper's Pal at 11:00 5 comments:

STORMY MORNING AT THE BEACH

A high tide and a full moon brought waves crashing onto the beach at Cadboro Bay Thursday morning.


Piper is a brave old lady and isn't the least bit worried about walking out on the outfall that takes run-off water to the sea. She's such a ham and does love to pose.  Of course, she knows she gets a "cookie" as a reward for her efforts.

PIPER HAS A BRAND NEW COAT

A CHILD CAME OUT TO WONDER